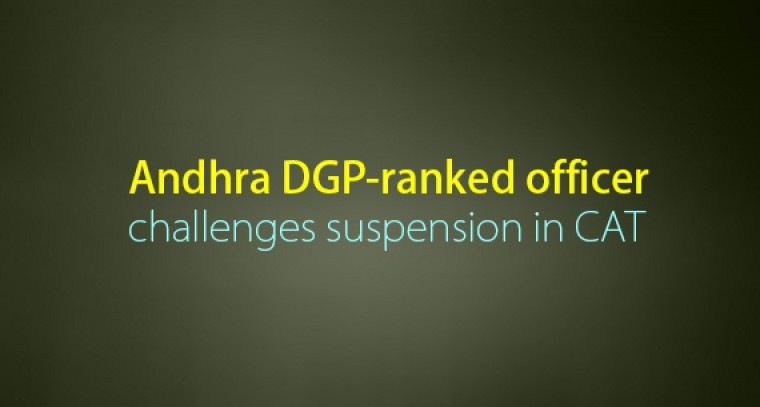 Terming the suspension politically motivated, Director General of Police-ranked officer A.B. Venkateswara Rao sought its quashing. The Indian Police Service (IPS) officer of the 1989 batch submitted to the tribunal that he was not paid salary since May 31.

The state government on Saturday suspended Rao for serious misconduct in the security equipment procurement. According to a confidential report, Rao endangered 'national security' by disclosing intelligence protocols to an Israeli defence manufacturing firm.

The officer was also asked not to leave Vijayawada without the government permission.

According to the report, Rao while working as the Additional DGP (Intelligence) during the previous regime, colluded with Israeli firm RT Inflatables for award of critical intelligence and surveillance contract to his son Chetan Sai Krishna, CEO, Akasam Advanced Systems, primary bidder on behalf of RT Inflatables.

"Based on facts uncovered via investigation, prima facie evidence is established on the grave misconduct and irregularities, which were wilfully committed by the accused resulting out of conscious and premeditated act of treason towards the state and nation," it said.

The official, however, denied the charges.

Rao, considered close to former Chief Minister N. Chandrababu Naidu, was removed as the Anti-Corruption Bureau (ACB) Director after the YSR Congress Party, led by Jagan Mohan Reddy, came to power in May 2019. He was without posting since then.

Earlier, in April 2019 on the eve of polls, the Election Commission had ordered transfer of the intelligence chief following a YSRCP complaint. It, as opposition party, alleged that Chief Minister Chandrababu Naidu was using the police to subvert election procedures in the state.

The YSRCP had also claimed Rao was behind defection of nearly two dozen YSRCP legislators to the Telugu Desam Party.