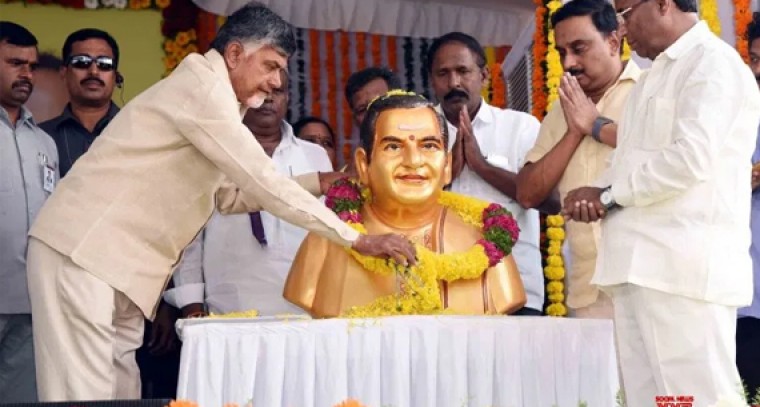 Amaravati, May (IANS) The Telugu Desam Party (TDP) on Thursday demanded that Bharat Ratna, the highest civilian award of the country, be conferred posthumously on its founder and former Andhra Pradesh Chief Minister N.T. Rama Rao.

On the second and final day of party's 'Mahanadu', a resolution was passed urging the Centre to confer Bharat Ratna on Rama Rao in recognition of his outstanding and multifarious contributions to the poor people, cinema and socio-political life of the country.

The resolution was passed on the birth anniversary of Rama Rao.

Popularly known as NTR, the legendary actor had formed the TDP in 1982 and created a record of sorts by leading the party to power within nine months in the then undivided Andhra Pradesh.

Naidu said the TDP would not relent till NTR was conferred the country's highest civilian award. He pointed out that NTR played a crucial role in opposing monopoly of the Congress and fought vigorously to form an alternative force at the national level.

Addressing the Mahanadu on the second day, he said that nobody can shake the foundations of TDP as it has a strong place in the hearts of poor and backward classes right from its inception.

The TDP chief recalled how NTR laid strong foundations for the party by launching popular welfare programmes like Rs 2 kg rice and housing for poor people that became role model for the rest of the country.

Naidu asserted that Chief Minister Y.S. Jagan Mohan Reddy's conspiracies and false cases will not be able to frighten the TDP cadres and leaders who will fight back with the self-respect and self-confidence that were given by the party founder.

Alleging that the government is foisting false cases, he said TDP cadres will not surrender to the ruling party's intimidatory tactics.

Naidu pointed out that in 1989, the TDP met with a crushing defeat with a 9 per cent vote share but in 1994, their party came back with a resounding victory with a massive 17.7 per cent votes and Congress could not get opposition party status at that time.

When the NTR government was dismissed undemocratically during Indira Gandhi time, Save Democracy agitation was run for 30 days which went down as a historic event in the political history of the country as a whole, he recalled.

Referring to manhandling and humiliation meted out to Dalit doctor Sudhakar, Naidu said that the YSRCP was presiding over goondaism and rowdyism in order to frighten all sections of people and then to plunder the resources of the state.

He said that if the TDP was not strong enough to fight back with self-confidence, the ruling party excesses would have become uncontrollable making common man's life miserable.