Counter protests in support of 3 capitals in Andhra 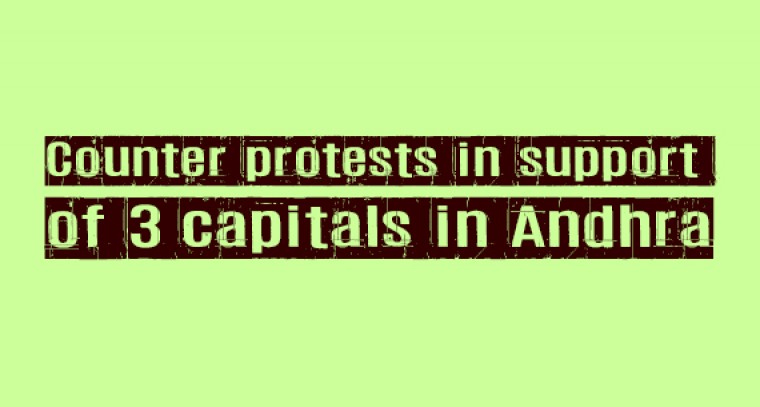 Amaravati, Oct 19 (IANS) At a time when agitations in support of just one capital at Amaravati have crossed 300 days, some people and Dalit organisations are also protesting in support of the capital city trifurcation.

Dalit organisations are carrying out protests at Mandadam and Tallayapalem in Tullur Mandal, demanding decentralisation.

Vadithya Shankar Naik, a Dalit rights leader criticized former Chief Minister Nara Chandrababu Naidu that he is only working for the progress of one section of the people.

"He never did justice to north Andhra and Rayalaseema regions," said Naik.

He said Naidu is blocking the sanction of the land to the poor people in the capital region, which demonstrates his so-called love towards the poor.

Parisapogu Srinivasa Rao, AP Madiga Reservation Porata Samiti (MRPS) leader questioned the Left parties as to why they are supporting Naidu, who is allegedly obstructing the sanction of free land to the poor.

Earlier, several minority rights organisations' representatives have also protested in Mandadam, in support of the three capitals, not very far from where the local people are demanding one capital.

Controversies have erupted in Andhra Pradesh after Chief Minister Y. S. Jagan Mohan Reddy announced the trifurcation of the state capital, proposing a judicial capital in Kurnool, legislative capital in Amaravati and executive capital in Visakhapatnam.

The Chief Minister reasoned that a decentralised development will benefit all places unlike just Hyderabad in the united state before the bifurcation.